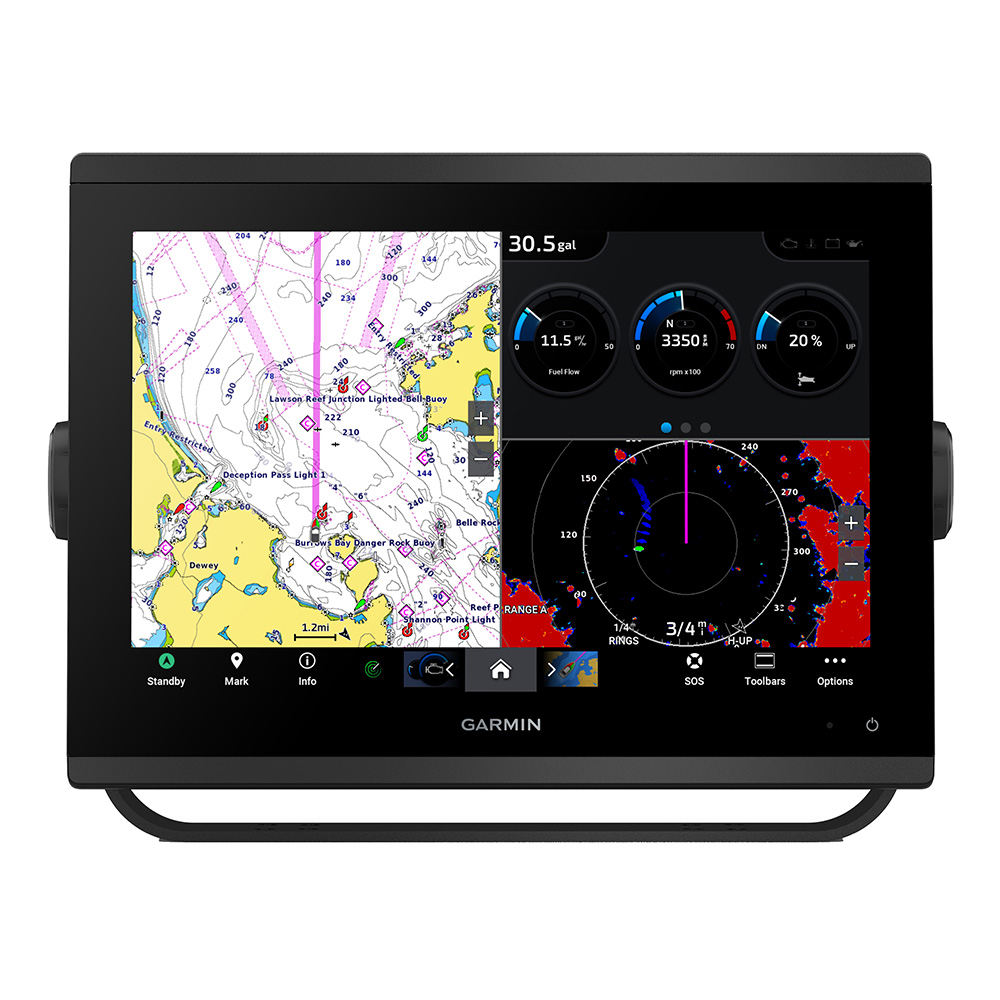 You’re a boater who wants premium features, maps, and charts for your connected helm. This crisp 12" high-resolution chartplotter makes that wish come true.

Get a sharper view from your connected helm with the GPSMAP® 1243 chartplotter. It's high-resolution 12” in-plane switching touchscreen and ultra-sleek design seamlessly integrate into your Garmin marine system, putting full control at your fingertips. Preloaded Garmin Navionics+™ coastal charts and inland mapping feature Auto Guidance+™ technology (Auto Guidance+ is for planning purposes only and does not replace safe navigation operations) for helping you get where you need to go. Plus, there’s support for optional Garmin Navionics Vision+™ premium map content. Easily build your marine system — from compatible sonar and autopilots to compatible radar, cameras and multimedia — by using HTML 5.0, NMEA 2000® and NMEA 0183 networking, J1939 for engines, and the Garmin Marine Network. Add FrontVü™ forward-looking sonar (sold separately). (The ability to effectively avoid forward collisions with FrontVü sonar decreases as speed rises above 8 knots[HT1] ) which can help in avoiding underwater obstructions ahead. Or pair your plotter with your other compatible Garmin devices, such as quatix® smartwatches, wind transducers, wireless remote controls, and more.

J1939 engine connectivity for easy integration with engines and our exclusive OneHelm™ feature for connecting to your compatible third-party devices, such as EmpirBus™ digital switching

Easily build your marine system — from compatible sonar and autopilots to compatible radar, cameras and multimedia — by using NMEA 2000® and NMEA 0183 networking and the Garmin Marine Network

Use built-in Wi-Fi® networking to pair with the free ActiveCaptain® smartphone app for access to the OneChart™ feature, smart notifications, software updates, and more.

What's In The Box?

WARNING: This product can expose you to chemicals including NICKEL (METALLIC) which is known to the State of California to cause cancer. For more information go to P65Warnings.ca.gov.

If you need technical help with any of our products, we can help with that. Whether a product isn't working correctly or your customer has questions about its operation that you aren't quite sure how to answer, we have your back, and we know what we're talking about.

Place your order before 4pm and it will ship the same day! Not many wholesalers can offer this kind of speedy delivery at such an affordable price. But at CWR we do not believe you should have to choose between speed and affordability.